Six images in a photo blog taken from my travel photography archives: visit www.timbirdphotography.com to see more of my pictures.

Last week the Travel Photographer of the Year competition announced its results for 2014 and I was delighted to get a picture Commended in the Wild & Vibrant single image category. I’ve been Highly Commended in the past, I won their 10th anniversary celebration competition last year, and I have been a finalist in previous years as well as this one. Thousands of entries are received from over 100 countries so I regard it as a definite compliment to be recognized in any way. The competition has become as much a part of my annual calendar as Christmas, along with the exhibition at the Royal Geographical Society in Kensington, London, that displays the winners and which takes place next year from July 24 to September 5. There’s a link to the winners’ gallery at the bottom of this page.

My commended picture, above, shows an early morning scene from the forests in the mountains close to the town of Angangueo in Michoacan, Mexico. The forests are protected to some extent against logging and wayward tourism as part of the El Rosario Butterfly Biosphere Reserve. Every year in the North American winter millions of Monarch butterflies make the long flight south – over 2,000 kilometres – to these same few hills to spend the winter.

When I made the climb up into the forest one early March morning in 2009, the first visitor of the day, the sun was still rising and the butterflies were resting in vast clusters in the treetops. In fact, it took my eyes some time to adjust to the fact that these were not leaves but an enormous congregation of insects. When the sun began to rise, the wings of the butterflies began to open in the warmth and after an hour or two the sky was alive with a softly fluttering orange cloud.

It is one of the most extraordinary, beautiful and spectacular phenomena in the natural world, made even more remarkable by the fact that the butterflies that return north to the United States and Canada from migration will not return to spend another winter here – in other words, the insects are somehow instinctively programmed to make their way to the same hills and forests.

A Mexican translator friend who helped me to arrange my visit tells me that the area is now more dangerous to get to because of the rising drug cartel-related and other violence that is sadly part of Mexico’s everyday life, so my visit was well timed. Happily the butterflies are immune to this particular kind of inane human activity, although not to environmental human damage.

It’s nice to be able to draw attention to a positive story from Mexico, a beautiful and exciting country with a vibrant culture. Perhaps my Commended picture and the others you can see here will serve as a small reminder of the country’s happier attractions.

Butterflies gather in thick orange mats in streams and springs.

The butterflies will land on your hands and clothing but you shouldn’t actively pick them up or you can damage the delicate wings. 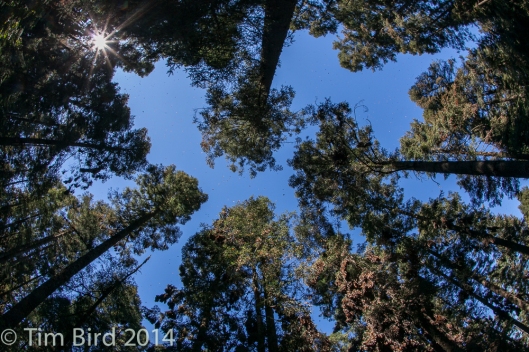 In my next issue of Six Picks I plan to show you some of the images that were shortlisted for the TPOTY competition but didn’t quite make the winner list – watch this space!

Congratulations to all the winners – these are some of the world’s top travel shooters and to get even close to their company is an honour and pleasure – and encouraging too.